What's the difference between electricity and electronics?

If you've read our article about electricity, you'll know it's a kind of energyЧa very versatile kind of energy that we can make in all sorts of ways and use in many more. Electricity is all about making electromagnetic energy flow around a circuit so that it will drive something like an electric motor or a heating element, powering appliances such as electric cars, kettles, toasters, and lamps. Generally, electrical appliances need a great deal of energy to make them work so they use quite large (and often quite dangerous) electric currents. The 2500-watt heating element inside an electric kettle operates on a current of about 10 amps. By contrast, electronic components use currents likely to be measured in fractions of milliamps (which are thousandths of amps). In other words, a typical electric appliance is likely to be using currents tens, hundreds, or thousands of times bigger than a typical electronic one.

Electronics is a much more subtle kind of electricity in which tiny electric currents (and, in theory, single electrons) are carefully directed around much more complex circuits to process signals (such as those that carry radio and television programs) or store and process information. Think of something like a microwave oven and it's easy to see the difference between ordinary electricity and electronics. In a microwave, electricity provides the power that generates high-energy waves that cook your food; electronics controls the electrical circuit that does the cooking. 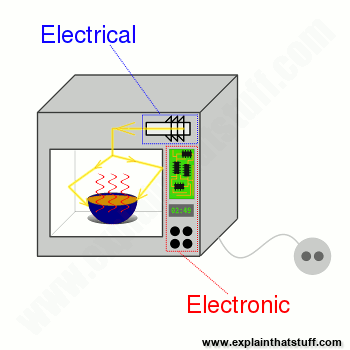 There are two very different ways of storing informationЧknown as analog and digital. It sounds like quite an abstract idea, but it's really very simple. Suppose you take an old-fashioned photograph of someone with a film camera. The camera captures light streaming in through the shutter at the front as a pattern of light and dark areas on chemically treated plastic. The scene you're photographing is converted into a kind of instant, chemical paintingЧan "analogy" of what you're looking at. That's why we say this is an analog way of storing information. But if you take a photograph of exactly the same scene with a digital camera, the camera stores a very different record. Instead of saving a recognizable pattern of light and dark, it converts the light and dark areas into numbers and stores those instead. Storing a numerical, coded version of something is known as digital. 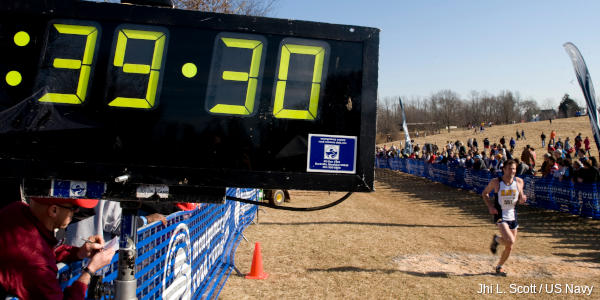 Photo: Digital technology: Large digital clocks like this are quick and easy for runners to read. Photo by Jhi L. Scott courtesy of US Navy.

Electronic equipment generally works on information in either analog or digital format. In an old-fashioned transistor radio, broadcast signals enter the radio's circuitry via the antenna sticking out of the case. These are analog signals: they are radio waves, traveling through the air from a distant radio transmitter, that vibrate up and down in a pattern that corresponds exactly to the words and music they carry. So loud rock music means bigger signals than quiet classical music. The radio keeps the signals in analog form as it receives them, boosts them, and turns them back into sounds you can hear. But in a modern digital radio, things happen in a different way. First, the signals travel in digital formatЧas coded numbers. When they arrive at your radio, the numbers are converted back into sound signals. It's a very different way of processing information and it has both advantages and disadvantages. Generally, most modern forms of electronic equipment (including computers, cell phones, digital cameras, digital radios, hearing aids, and televisions) use digital electronics.